We took BBC Three’s comedy to the masses and generated international awareness for the show and its star.

Already a huge hit online with millions of views on streaming platforms and a Lovie-Award win, the satirical comedy show Miss Holland, about a Dutch beauty queen armed with a clipboard full of questions to explore British culture and to find her own very Prince Harry, was set for a brand new series on BBC Three.

We were tasked with raising the profile of the show’s creator, Eline Van Der Velden, and generating mass awareness and streams of the show.

With a three-pronged approach, we announced the launch of the brand new comedy series to build a buzz, placed interviews with the show’s creator and guests stars within high profile media titles and hand picked content from the first and second episode – even saving some from the cutting room floor – which we supercharged with a newsworthy spin and seeded online.

We made sure our campaign tapped into topical discussions such as women in comedy, female body hair, the appetite for the Royal Wedding and the Great British cup of tea. Our approach generated over 40 pieces of standout coverage for the show, with a huge profile on Eline by BBC Entertainment, interviews on BBC Radio 4 Woman’s Hour and talkRadio and clips of the show published and written about by titles such as Mail Online, Mirror Online, Daily Star Online, Metro Online, Business Insider, ELLE, TV & Satellite Week, British Comedy Guide and Chortle.

Our campaign generated over 19k video streams for the Miss Holland trailer and the first two episodes online, helping BBC Three to attract a whopping 45.5k YouTube views across the entire series at launch, not taking into account the views on the media titles’ own players and the iPlayer platform. 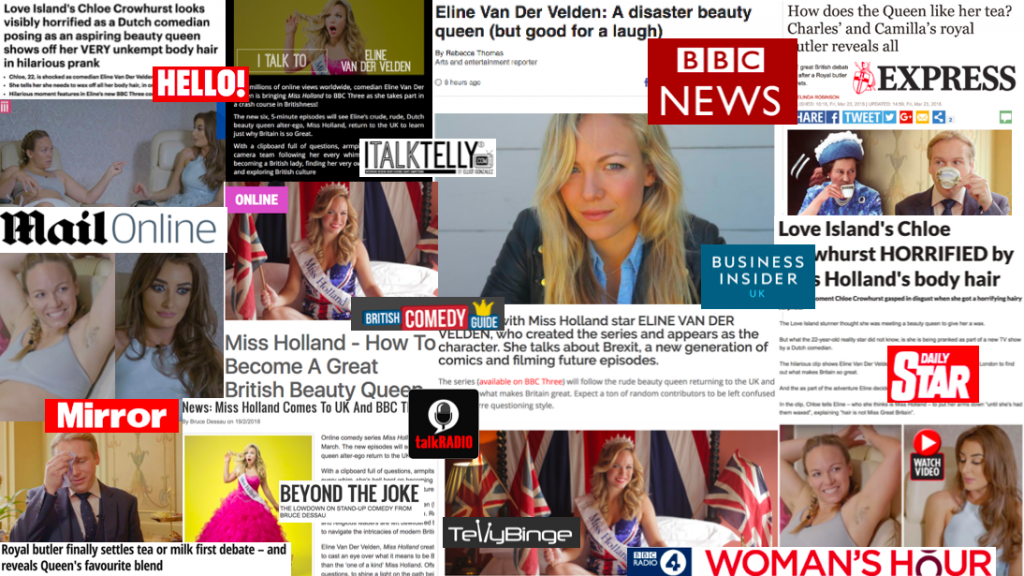