We got Cartoonito to the #1 pay TV kids channel with the world’s first living colouring book experience.

Preschool TV channel, Cartoonito wanted to drive tune in, online traffic and build a connection between the onscreen characters and the Cartoonito brand, setting it apart from competitors in time for the channels’ new brand refresh, with a focus on reaching parents via influencers.

We identified colour and creativity as an ownable space and created the world’s first immersive ‘living colouring book’ – complete with blank character patterned walls, a giant branded TV and armchair – to launch the Cartoonito Club, an online creative hub for families.

Transforming a space in the heart of London’s West End into the ‘living colouring in book’, the event was attended by celebrities and their little ones; Billie Faiers, Danielle Lloyd, Vanessa Feltz, Imogen Thomas, Russell Kane, Tamara Ecclestone and Shappi Khorsandi. We also hosted VIP parenting media from Huffington Post, The Sun, Fabulous, Express and various parenting bloggers. All the VIPs were cartoonified and made part of the experience, finding their family portraits hanging on the ‘wall of fame’ among Cartoonito’s famous characters.

We invited key working media along to the event and lined up exclusive interviews with the celebrities in attendance. With a solid media strategy in place to ensure nothing was leaked to press during the event, we secured 17 pieces of national coverage the next day, including multiple pieces on high reaching MailOnline and The Sun. Social engagement about the exclusive pop-up event also proved particularly high on Instagram, and stories were also published in Express, Star, Now, Closer, Londonist, Families Online, The List and more.

The campaign has been supported with a successful influencer engagement programme generating tons of branded and on message posts from influential parents online.

Our ‘world’s first living colouring book’ helped Cartoonito to the top of the ratings as the #1 pay-TV channel in the weeks following on from the event. 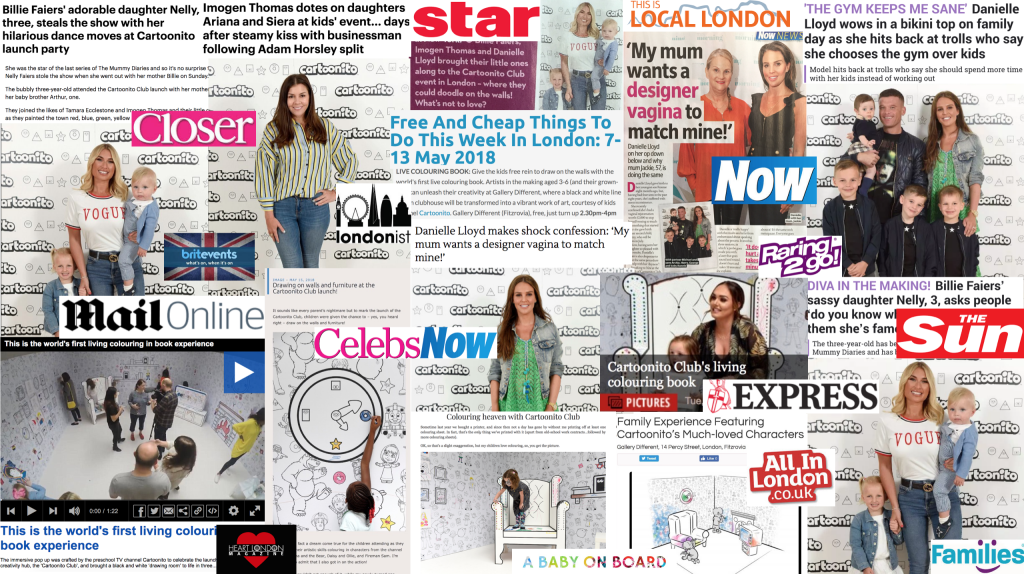